Whoever thought that two wheels could turn into so much good? But just ask Chuck Ritz and he’ll tell you the reason; riders give.

“People just don’t always see it,” says Chuck. “They see bikers as outlaws, with big bellies and big beards, but what they don’t see is they have even bigger hearts. Motorcyclists and the riding community, they truly want to give back. They not only open their wallets, but they also open their hearts to causes they believe in. I don’t know if anyone has tried to figure out how much money bikers have raised, but it’s probably in the billions.”

Chuck is a Maryland native and for more than 15 years he’s been orchestrating two prominent motorcycle rides which give the riding community a chance to contribute and gives everyone the opportunity to give for good. Chuck’s Hope and Peace foundation has raised thousands to support a myriad of causes, most prominently two rides: one raises funds and to give hope to those facing the pain of child abuse, the other ride to remember all those connected to the 9/11 attacks, (http://www.thehopeandpeacefoundation.com/).

“My brother was a city homicide detective,” says Chuck. “He started a golf tournament for the Baltimore Child Abuse Center, (https://www.bcaci.org/). I got involved in that too and started learning the statistics of child sexual abuse and I was blown away by those numbers. It’s 1-in-3 girls who are sexually abused and 1-in-6 boys, before the age of 18. Only 1-in-10 cases are ever reported.”

Chuck wanted to make an impact to raise awareness about child sexual abuse and human trafficking, raise funds to help the victims and provide dollars for care and counseling. In April 2004 he started the Ride for Life. “It started out as a spring music festival,” says Chuck. “Three or four bands played after the ride, it was more of a biker music event. But after the 10th year, we decided to change it up. Three years ago we started inviting families with their kids and they just love it. The ride pulls into St. Vincent Children’s Center in Timonium just before noon and we do moon bounces, games, photo booths, pony rides, etc. The families get to hang out with the bikers for a few hours and see that people really do care for them.”

You get what you give in life and Chuck says he knows it’s so necessary to raise the awareness. “It’s pretty staggering to hear that there is an abuse reported every 10 seconds. If all the cases were actually reported, it would be every second.”

The reality of abuse and its consequences are hard to believe. Chuck shares one story which demonstrates the devastation: “Back in 2013, a 10-year-old girl, Kami Ring from Port Deposit, Maryland was spending time with a couple she considered to be just like her “grandparents”. The couple’s son, just released from prison, raped and murdered Kami one night after work and tried to hide her body. Chuck and his crew organized a ride and raised $5,000 to donate to the family for funeral expenses. Each year since then the Ride for Life is dedicated to Kami and other victims of child abuse who are added to the list.

“After the Gerry Sandusky case we saw the numbers of participants explode,” says Chuck. “During our 7th year of the ride a survivor came out and shared her story with everyone. After her talk, one of my friends came up to my wife Hope and I and said there is something I want to talk to you about, she said, ‘I was abused 50 years ago, and for all these years I considered myself a victim, but now I know I am a survivor.'” “We can never raise enough money to make as big an impact as we made that day, “says Chuck. “The impact of hearing that person now see themselves as a survivor, and not a victim, was huge.”

It’s impact, and dollars that do matter. To date the Ride for Life has raised nearly $50,000 and all of it going directly to the Baltimore Child Abuse Center.

Growing up in Essex, Chuck says he had some of his own challenges to deal with – including physical abuse. But one of the biggest gifts you can give in life is to forgive, you don’t have to forget, but to truly move forward you have to forgive.

“When my dad was drinking, things got violent and scary for myself, my brother and my mom,” says Chuck. “You hear a lot about those kinds of things, much of it caused by alcohol and drug abuse. But my dad is 91 now, I’m his caregiver. Looking back I can see our own demons, but life goes on.”

Giving so much and truly finding his purpose and passion, Chuck made himself attractive to the opportunity in which he now serves, working as the facilities manager for the Baltimore Child Abuse Center. “They wound up hiring me to come down to facilitate and maintain the building,” says Chuck. “My job and my participation with that organization is one of the most rewarding things I’ve ever done in my life. It is a pretty amazing team that works at the center. It’s incredible what they hear and listen to, and then are there to serve and help every step of the way.”

Service is what attracts Chuck and it permeates every fiber of his being. His recognition and appreciation for those who serve led him to create his other event, The 9/11 Ride.

“September 11th, 2001 is the day that changed my life and everyone else who witnessed it,” says Chuck. “I sat and watched it on TV like everyone did and wound up going to New York a week later to photograph what was happening. I walked Ground Zero for ten hours and took pictures, but my biggest realization is after 9/11 how we were all the same.”

All just people, all just Americans, all just being part of the human race. It’s empathy, sympathy and compassion that make us truly who we are. Chuck believes his rides help take us back to those “roots of life”. It’s why he and others now ride for those who serve.

After the 10 year anniversary of the 9/11 attacks, Chuck, along with Harley Davidson of Baltimore and McAvoy’s of Parkville, started the 9/11 Patriot Ride in Maryland.

“It’s the Saturday after Labor Day and each year the ride is getting bigger and bigger,” says Chuck. “Last year was the best year we had with 260 bikes and 350 riders. Through the years we’ve gained great support with the Harford and Baltimore County police departments, as well as Baltimore City escorts each year. Our goal is to make it a safe and enjoyable ride.”

The goal of the ride is to honor those who lost their lives in the attacks, the first-responders who have passed on because of the health consequences related to the search and rescue, and those who died in the wars following the 9/11 tragedy. Chuck and his wife Hope want to keep the promise to never forget.

“In the past seven years we’ve raised $25,000 to be donated to different organizations,” says Chuck. We sell sponsorships and the day before the ride we create the path of honor.”

The flags go right past the Parkville police station and right in front of Parkville High School,” says Chuck. “Those kids who graduate this year from high school were just born when 9/11 happened. Seeing the path set up in front of the school hopefully becomes a reminder to them as to why the flags are there and what they represent.”

Two years ago, on the 15th anniversary of the 9/11 attacks, Chuck and others helped create and fundraise The Gold Star Committees to honor Gold Star families, those who have lost loved ones in the attacks or in the wars which followed the 9/11 tragedy. They also unveiled the Maryland 9/11 Rolling Memorial. The memorial includes four bronze plaques with the names of the 69 Marylanders killed in the attacks, the 141 Marylanders who died in Afghanistan and Iraq and the eight others who have lost their lives since the wars ended. The centerpiece of the memorial is the McShane Bell Foundry. The bell was built in Baltimore in 1856 and was recently purchased by Robyn and Norman Anderson, who lost their son in Iraq. He and one of his best friends joined the Marine Corp and were killed five weeks apart. Between the rides and the candlelight vigils, it’s a way for Chuck and Hope and so many to care and to share.

Today, Chuck and Hope care a lot – taking part in more than 20 charity rides a year helping to raise tens of thousands of dollars for those in need, everything from The Metro Burn Fund, to Toys for Tots, supplies for hurricane victims, food donations and more. It’s a labor of love for each of them, two dreams, one vision: to ride for life, to ride to remember, to ride for good.

​This story, as well as all of the others on our website, are written by Mark Brodinsky, an Emmy-Award winning television producer, speaker, popular blogger, and published author. You can find more information about Mark on his website at http://markbrodinsky.life/ 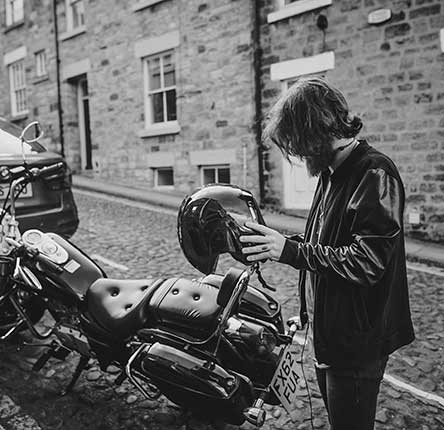